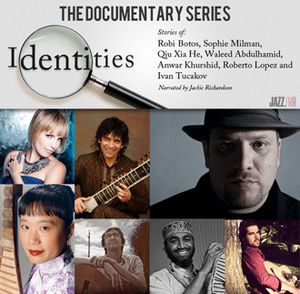 Jackie Richardson’s Introduction.  Here we tell the stories of musicians who chose Canada and these stories come to us from all around the world – this time from Pakistan, where Anwar, a brilliant young mathematician, grew up a little bigger in mind and spirit than the strict rules that surrounded him.

Teaching Style.  Listen and imitate.  These South Asian scales and figures have been passed on this way for more than 2000 years.  It is how Anwar Khurshid was trained and how he trains his students.  He plays -- and they copy what they hear. 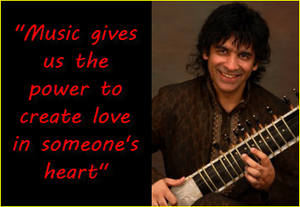 On Leaving A Corporate Career for Music.  “A lot of people tell me that you are the success story for immigrants because when I came here, I had like $200 in my pocket. But I went to university here,  got myself an actuarial job, worked at it,  became good at it; then I decided that I don’t want to do this anymore.  The musician in me had to leave the gilded cage!”

On Differences Between India & Pakistan.  “For me that boundary between India and Pakistan is lost.  A lot of really close relationships that I have are with people of Indian origin [who are Hindus].  It never occurs to me that that they are Hindus and I think it never occurs to them either!  I have more Indian friends than Pakistani friends.   I don’t think this would have happened in Pakistan or in India!”

Sitar School’s Mandate.  “Through his Sitar School of Toronto what Anwar is doing is that he is reaching out to everyone.  I mean most of his students are not necessarily Indian or Pakistani.  A big part of his mandate is reaching out to Western audiences, Western students... people who are interested in this music they have heard in their lives but don’t know as well.”  (Paul Deslauriers, Montreal guitarist and band leader).

Canadian Manners & Lessons Learned.   “One of the best things that changed me as a person was when I was learning to drive.  Traffic is an indicator of what kind of people there are in a society – and I still admire Canadians for their [patient] goodness!  Once I was in a small city in Ontario and there was an uphill slope. When I tried to start moving after a red light, it was tricky to balance everything on an uphill start... the clutch, the accelerator and it didn’t work for me and the car stalled!  I had a guy behind me.  He didn’t move!  This happened 3 times but he didn’t go.  He waited for 3 lights until I actually got it!  I am pretty sure if I was in Pakistan, nobody would have done that.  I learned something from him!  I said to myself, this is the way I want to be.  [Now] you cannot get me to honk!”

Openness As A Musician Towards Fusion.  “I have a feeling that our [subsequent] collaborations would be very interesting! Anwar is very adroit (as a musician). He is very adventurous; an articulate and sophisticated fellow, regularly playing with people from different backgrounds like blues guitarists.” (Bruce Cassidy, Canadian jazz legend).

The Power Of Music.  “Somehow, music empowers us [musicians], giving us the power to put love in someone’s heart.  How could music do that? It just does that! It empowers us to bring about a change in people who come into contact with it.  It gives us the power to change the whole world!”